VPN Makers offers what seems to be a reliable VPN service, to help you unblock restricted websites. Their website is a little irritating because you have to complete a Captcha verification before browsing their site, but their service does have many good features and benefits. In addition, understand that they are based in Istanbul. However, even though they are based abroad, they do have servers in popular countries such as the UK and the US.

One area that VPN Makers really shines is their pricing model. To put it bluntly, their service is one of the cheapest on the market. In fact, you can get their VPN service for as little as $3.45 per month! Their pricing plans are as follows:

Furthermore, they offer a variety of payment options such as PayPal, PerfectMoney, CashU and WebMoney. They make it very easy to order their services at a price lower than most other providers. 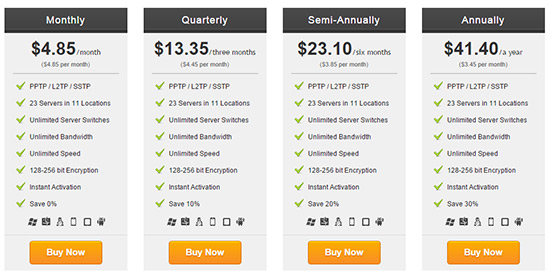 VPN Makers offers a couple features of their program that most other VPN services don’t offer. Firstly, you can try a 60 minute trial absolutely free to see if you like their interface and the quality of their service. In addition, they offer a free 6 month membership to writers who can write a quality article for them.

Also, their service can run on just about any device including Windows, Mac, Android devices, iPhones, iPads, and Linux.

Though they offer a quality service, understand that they don’t have servers in as many countries as their competitors. This may or may not be a concern for you – depending on the country you want to connect to and the websites you want to unblock. The locations they have servers include: Hong Kong, Turkey, France, Germany, Netherlands, Spain, Switzerland, Ukraine, United Kingdom, Canada, and the United States of America.

To keep up with their competitors, VPN Makers offers the following protocols in their security software:

Admittedly, these protocols are very standard and many come to expect them to be included in any decent VPN service.

One are of concern is the lack of technical transparency on their website.They claim to be the fastest VPN service, but there are few details and specifications. For example, there is no mention of the speed of their network infrastructure (e.g. a gigabit or 10-gigabit network backbone). Speed was not always optimal on the limited time I tested it for, I was not impressed.

While they do provide a number to call, they clearly state on their website that email is their preferred method of communication. You can either use the tab in the bottom-right of their website to send an instant message or visit their contact page to submit a ticket to their ticketing system. Many have been impressed with their customer support, many claiming that they received a response in less than an hour or two. Though they do provide adequate customer support, they don’t seem to have it as fine-tuned as some of the bigger companies. Even with competitive prices, the largest drawbacks include lack of transparency on their security, smaller global coverage than competitors at the same price range, and lack of stable speeds. I would be hard pressed to suggest them above other service providers at this time.