Disconnect has become quite popular due to several different browser extensions that were designed to increase online privacy. And they have advanced so much and grown such a large following that they have finally put together and entire package of security and privacy tools. These tools will help prevent online entities from tracking your browsing habits, collecting your personal information, and help maintain your anonymity. But is it all it’s cracked up to be? We’re going to dissect this service to help you make an informed decision before taking a gamble and buying it.

But they look extremely credible, because they post all of their partners and all of the media outlets they’ve been featured in on their home page. They been featured in the New York Times, Today, 60 Minutes, and CNN. Furthermore, they’ve partnered (in some capacity) with Firefox, Tor, and other reputable tech companies. Right off the bat, I can’t help but feel that they’re a trustworthy and high quality service to have garnered so much positive from the media.

Before looking more closely at Disconnect’s features, let’s talk about their pricing model.

First of all, you should be aware that there is a completely free version of Disconnect. They have a tiered pricing system, whereby higher levels of service include advanced features. The Basic free version is watered down, but it does protect a single web browser from tracking attempts and helps users make searches privately and anonymously. In my opinion, I think everyone should take advantage of the free version whether they intend to use a higher-grade service or not.

Next is the Pro version, which costs $40.00 as a one time fee. Naturally, it includes all the features of the Basic version, but improves upon them several features. First of all, it will help protect your system against malware. I don’t think their anti-malware features are as strong as a full fledged antivirus and antimalware application, but it’s certainly better than nothing.

In addition, the Pro version helps optimize your computing device. They claim that it will help your computer run up to 44% faster, use up to 39% less bandwidth, and increase battery life. Last but not least is the Premium version of Disconnect, which costs $50.00 per year ($4.16 per month). The Pro version can be used on up to 3 different devices, and includes all of the previous features. But the real advantage to the Pro service is that it includes a VPN tunnel, which will bolster your security, anonymity, and privacy even further.

It’s also worth noting which platforms the different levels of service are available on. I though it was odd that they wouldn’t support the same platforms consistently. The Basic version, as a web browser extension, works with Chrome, Safari, Firefox, and Opera. The Pro version, however, is only compatible with iOS and Mac OS X systems, which I found a little strange. Lastly, the Premium version supports Windows, Android, Mac OS X, and iOS devices.

Most VPN providers don’t offer this added functionality. That said, I also don’t think that their VPN solution is nearly as strong as a purely VPN-centric service. Disconnect offers servers in the USA, Ireland, Japan, and Germany. Even the smallest competing VPN services have servers in at least 9-13 countries. Some of them, such as PureVPN, even have servers in 140 countries around the world.

I should also mention that users can connect up to 3 devices simultaneously to a VPN tunnel with their Premium plan. And even though they don’t explicity block P2P traffic, I think there are better VPN alternatives for Bit Torrent users. Almost every country they operate servers in is opposed to Bit Torrent downloads. 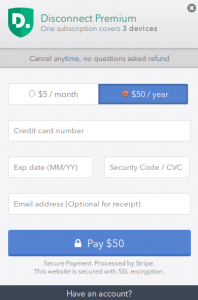 These days, just about every search engine (and many websites, for that matter) store information about you. They store the following types of information:

This type of information is collected on a regular basis. As a side note, I highly recommend using a cookie management extension to help protect your privacy, especially if you decide not to use Disconnect. A lot of the information collected about you is fed into advertising systems so that they can send you targeted advertisements, too.

Furthermore, you should be aware that governments frequently ask Google (and other search engines and digital services) for personal user information. Since these companies want to stay within the government’s good graces, they are often coerced into quickly forfeiting this data. The good news is that Disconnect can shield you from prying eyes. You see, the first route all of your data, searches, and queries through their network of servers. This makes you anonymous by making it look like the searches originated from their servers’ IP addresses.

Essentially, this works in the same way that Tor, VPN servers, and proxy servers work. The idea is to use an intermediary server to make requests on behalf of an anonymous system. However, Disconnect adds some special features to further prevent your browser and computer from being tracked.

One of the first thing you see when you visit their website is their motto towards Internet privacy – and it’s very encouraging. I really like the attitude and stance they take on protecting users’ information. They state the following on their website:

“Our privacy policy, in a sentence: We don’t collect your IP address or any other personal info, except the info you volunteer.”

But I have some bad news. While I like how committed and passionate they are about protecting users’ online identities and data, Disconnect is actually based in the United States…and I think you know what that means. A lot of people are still wary about using domestic US digital services in the wake of the PRISM program and NSA wiretapping scandals. If you distrust the NSA and domestic US firms, you may want to look for an offshore VPN service instead.

But I was sorely disappointed to see that they only accept credit and debit cards. Most VPN providers offer a smattering of different payment options to protect the identities of their users. Most of them now accept Bitcoins so you can pay anonymously. Disconnect only accepts credit and debit cards, so they’ll be able to tie your payment card with your identity. I’m not saying that Disconnect isn’t trustworthy, but I am saying that their ability to identify customers could be a huge problem if the government comes knocking on their door.

And as you would expect, they don’t monitor any of your online activity or log your data. They do keep some connection logs, as does just about every other VPN provider, but there’s no data that watches what you do online – merely connection statistics and the like to help them plan for capacity and maintain their servers.

The actual encryption protocols used depend on your level of service and the device you are using. On iOS devices, encryption is implemented by using IPsec IKEv2 encryption. On the other hand, Mac OS X and Windows devices us OpenVPN AES-256-bit encryption. For those of you with bored faces and glazed-over eyes, just know that these protocols are extremely secure and will make your data impossible to read.

So, is Disconnect right for you? Only you can answer that question, but for me, I’m not so sure. For the record, I like to say once more that everyone should take advantage of their free service. I don’t use Apple devices, so the Pro plan won’t work for me. And as far as the Premium plan is concerned, I think there are many better, more affordable, and more feature rich VPN options out there.

It may be true that their premium plan isn’t that expensive. In fact, compared with other VPN providers, they’re a tad on the cheap side. But I was disappointed to see that they only have servers in four measly countries. Disconnect Premium is kind of an oddball service, because it’s really a mix of three different types of software. Instead of being solely an anti-tracking, anti-malware, or VPN service, they seem to be somewhere in between.

I would recommend that you take advantage of a service that focuses on VPNs, since their core competency is building global networks of secure servers. In addition to a VPN service, I think everyone should at least take advantage of their free browser extension. I have mixed feelings, but I have to admit that a VPN service bundled with anti-malware and anti-tracking features for only $4.16 a month is hard to beat.

The bottom line is that their service will bolster your Internet security in a lot of different ways, and stop online entities and third parties from looking over your shoulder.