One of the well established names in the market, Hong Kong based PureVPN has been in service since 2006. As with the majority of competitors, their service offers users with full end-to-end traffic encryption of web traffic, as well as unblocking geo-restricted content all over the world. Today, PureVPN has grown into a versatile service that caters to both individuals and businesses with dedicated IP plans. Over the years, customer feedback has been mixed, and for good reason. Although service quality is usually dependable and above average, PureVPN had a shady refund policy that got lots of unsatisfied customers unable to get refunds. As of late, that refund policy has been improved and better communicated. Although still restrictive, users can now properly test speeds across various servers and remain under the usage limit for cancelling the service if it doesn’t fit the bill.

PureVPN offers the 3 standard options of monthly to yearly packages, offering all the same basic VPN features and access across all of them. As of 2017, they now offer 2 year plans for a larger discount, and stopped offering the 6 month plan. Each plan allows for up to 5 simultaneous connections to be used, qualifying PureVPN as one of the cheapest services available on yearly plans.

Two paid addons are offered at checkout. First is their NAT Firewall service for $1.00 per month, which can be used to better secure your network. This feature can be especially useful if you travel or use public WiFi networks regularly. Dedicated IPs with or without DDoS protection are also available at $1.00 per month. For most users, these addons are not required and could be ignored. If you happen to need more than 5 devices at once or multiple dedicated IPs, they also provide business plans.

Various payment methods are accepted, including Bitcoin and other crypto-currencies. Additionally, users can opt to pay anonymously by using gift cards from various vendors.

Next I want to touch base on their refund policy. PureVPN has come under fire by many peer reviews that stated being unable to get a refund on a service that was not meeting their needs. No honest customer should have to deal with being declined on reimbursement of a VPN service plan if it failed to meet expectations. The good news is that PureVPN has improved on this aspect by increasing the data transfer limit before a refund is no longer valid, as well as extending the refund period from 3 days to 7 days.

The data usage limit was set previously set at 500 Megabytes. As you can imagine, users could quickly reach that amount by speed testing a few services and servers. Now at 3 gigs, and 7 days instead of 3, users can properly test various servers and high bandwidth services before making a call. But why does PureVPN put limits in the first place? It can be argued that 500 megs was beyond small, and a shady practice on their part, but the 3 gigabyte limit is fair. Multiple other VPN services that have put similar policies in place in order to protect themselves against illicit accounts used for spam, being repeatedly created with the intention of cancelling at the end of the trial period.

Starting with PureVPN’s network, more than 500 servers cover 141 countries in a total of 180 different locations. This is one of the biggest large-scale VPN networks available and has been continuously upgraded to accommodate more users. With multiple servers in all the key locations for web services, it is not difficult to find a server with a quick response time. The service works well for basic web traffic encryption, as well as streaming video.

PureVPN eases access to sites that would otherwise be restricted to your geographical location by suggesting servers. Their ‘Smart Purpose Selection’ helps you locate good servers for specific streaming services, such as Netflix US or BBC UK, but also provides ping response times for selecting adequate gaming or hosting servers. Users can also opt to use the modes tab, which offers specific usage profiles. ranging from streaming and file sharing, to high encryption for security and privacy. Peer-2-Peer torrent safe servers are also marked for convenience. If torrents are not supported on specific countries, related websites will be blocked as a safety layer. This helps avoid having to respond to any DMCA take downs in countries that heavily enforce it. The same is done for VOIP apps, where a phone icon is added for voice-over-IP compatible servers.

The software client provides kill switch that when turned on, stops all web data traffic in case the VPN connection drops. Another great feature available is Split-Tunneling, allowing you to separate VPN traffic and non-encrypted traffic passing through your ISP. Useful if you want to have certain apps or browsers running unaffected by speed loss on distant server locations. As covered, one account allows 5 simultaneous devices to connect, Dedicated IPs can be purchased, and optional DDoS protection is offered for gamers or server admin for example. Business plans cover larger user base needs.

PureVPN’s software is available on all platforms, Windows, Mac, Linux, Android, and iOS. Their client allows to connect through all popular protocols, from OpenVPN down to PPTP, notably including IKE. OpenVPN uses 256-bit AES encryption and uses a bank of over 80,000 IPs to provide adequate anonymity to each session. For routers, PureVPN provides manual configuration tutorials, but for DD-WRT users, and much better applet is available for download. 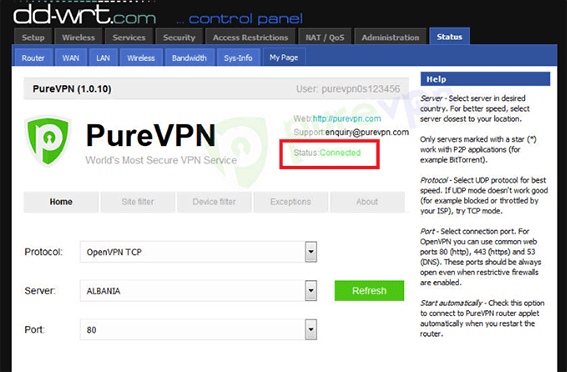 The DD-WRT applet essentially adds a graphical VPN connection client to your router. This way, you can select servers from a list as you would traditionally on the app. This is much faster than having to configure each server manually every time you need to change locations. The same kill switch and split tunneling features are also available through the router. Configuring a VPN on your network router is a great option if you need to encrypt more than 5 devices at a time. It essentially allows you to run an unlimited amount of devices through the VPN tunnel on your private network.

Just as most providers, the main focus is security and anonymity. They provide terms of service that state a zero-log policy is in place for all web traffic passing through their network. PureVPN’s service promises to block and circumvent ISP monitoring, or bandwidth throttling, as well as keep your data encrypted and safe on any connection, including public Wi-Fi hotspots. More than 80,000 IPs are used to keep the server sessions adequately anonymized. It also includes DNS Security tools to mask any DNS queries from your ISP and 128-256 bit encryption protocols include SSL, PPTP, L2TP/IPSEC, SSTP (default on Mac client), OpenVPN and IKE. Their proprietary DNS servers also help with performance and speed.

As mentioned in the features section, an optional kill switch can be turned on to stop all web traffic until the VPN connection is re-established. Users can also purchase optional DDoS protection on dedicated IPs, or a NAT Firewall for adding a layer of security to your hardware devices themselves.

From testing back in 2014, and comparing results in 2016, I could not see a considerable change in the quality of service. That’s a good thing because I always enjoyed PureVPN’s performance. I can still nearly max out my bandwidth on my most popular countries to use, notably the US and UK, which I use both for local and international streaming services. The connections remain stable for long periods with no leaks to report. The network has only grown a little with additional servers for popular connections points, which has helped keeping speeds up to par regardless of a growing number of subscribers.

Live stats are available to graphically monitor your uptime, bandwidth usage, and current transfer rate speeds. This screen makes it easy to live monitor your current speed, but it would have been useful to include detailed server information regarding loads and available bandwidth. When connecting to distant servers, some instances saw as much as 20% speed loss. This kind of degradation is to be expected when the country is located considerably further away. However, switching to another local server had much better results. Live monitoring on server loads could save users from doing the guesswork by providing a visual on server load.

The website offers very clear and precise guides to quickly get you setup on a variety of devices from Roku to gaming consoles, but for advanced setups, you might require additional help. Support is available 24/7 and can be contacted quickly through their chat app on the website. However, the chat support is often composed of first tier agents that don’t always have much experience or tools at their disposal. Luckily for the most part, users will never require help setting up the client or even configuring a device. The step-by-step tutorials available in the member’s portal are well done and graphically rich to help you get on with using the service.

When I compare PureVPN to other services with large networks, I find they  prevail in a couple of areas. One being that the service is P2P friendly, and carefully marks and reserves servers for this specific usage. Secondly, speeds have been consistently good, making the service dependable for long term yearly plans. They removed cumbersome bells and whistles such as the dedicated streaming browser, and made the app much easier to navigate. Overall, the service is now less confusing, and streamlined with a well designed user interface However, for such a large network, more detailed server information would be most welcomed. Otherwise, the service does great for a wide variety of applicable usage.