The fear that Skynet would ever become a reality, and that our world would be overrun by artificial intelligence spread through global server networks remains nothing more but fiction from our beloved Terminator movies. Although the scenario of nuclear warfare upon humans by machines is all gloom, it did not stop the NSA from appropriating the name to one of their no longer secret programs.

The information surfaced today on an article by The Intercept covering terrorist surveillance. Unlike the end of world doom scenario that the fictional Skynet presented, the NSA’s SKYNET is a surveillance software platform capable of analyzing and tracking both location and communication metadata from bulk call records. By analyzing all the past phone records, the program is capable of detecting unusual or suspicious patterns. 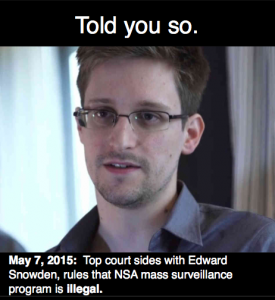 According to the NSA, their SKYNET program is used to identify Al Qaeda couriers. By analyzing all past movement patterns, the agency can discern if an individual is regularly traveling suspicious routes. A far different comparison from the doom and gloom of nuclear warfare against undefeatable machines.

Wired.com also brought up a previously revealed program called MonsterMind on their own coverage of the Skynet program. The MonsterMind program was revealed last year by Edward Snowden in an exclusive interview with Wired and James Bamford found here. This program on the other hand, has an eerie resemblance to the Skynet we all know from the movies. MonsterMind was created to operate completely autonomously to systematically stop any foreign cyberattacks against the US, while having full capability of launching its own retaliatory attacks with no human interaction. The software is capable of utilizing algorithms to almost instantly detect malicious traffic resulting from an imminent attack, effectively stopping it in its tracks. Now that resembles something more like a robot with a brain.

In the wake of this new Skynet program, next month American Congress must decide if it will renew the Patriot Act, responsible for the majority of the NSA’s phone surveillance. A panel of three judges passed their own court ruling, stating that the NSA’s telephone metadata surveillance program is illegal, and was never approved by congress. Although the ruling cannot cease current surveillance programs, it has now been challenged. In less than a moth, Congress will have to make their own call. Let’s wait and see.

VPN Types: What is Site-to-Site VPN