Exclusive Offer: Get a 49% Discount off ExpressVPN
Get This Deal
Home » Buffered VPN Review
Editors Rating
Visitors Rating
[Total: 3 Average: 4]
When you first land on Buffered VPN’s homepage, they present all the credible media organizations they’ve featured in including Wired, Time, and The Sydney Morning Herald among others. Right off the bat, that makes me think that they’re a legitimately good service. But are they the best option? We’re going to analyze several crucial qualities of this VPN service to help you decide whether or not you’re going to trust them and put your personal Internet data in their hands.
First off, I’d like to point out that they aren’t based in the United States, so you don’t have to worry about US law enforcement of the NSA creating a back door into their service. They are based out of Hungary, which has favorable data retention and privacy laws. And although being a new service on the market. They have done well so far as maintaining and growing a solid network of servers that provide good speed performance.

To be frank, I think that the cost of their subscriptions is a bit on the high side, but they’re certainly not the most expensive provider I’ve ever seen. The following outlines their pricing model:

One thing that irks me a little is when VPN providers limit users to one or two simultaneous connections per account. As such, I was pleased to discover that Buffered allows up to 5 simultaneous connections. This makes them a great option for families or people with a lot of devices they wish to secure. And although the cost remains high, a solid 30-day no hassle refund policy allows you to test the service risk free. This in my opinion is better than a short trial, as you get to test performance for a longer period of time.

Also, I wish that they accepted more payment options. For instance, a lot of people like to pay with Bitcoins to protect their anonymity. Unfortunately, buffered doesn’t accept Bitcoins yet. However, they can accommodate the vast majority of customers with payment options including PayPal, Visa, Master Card, and Discover.

I’d like to point out again that having 5 simultaneous connections helps to justify their price. With an annual plan, the per-device cost per month is only $1.65, which is pretty reasonable. But given how much they cost, I would have expected them to have a larger network of servers with a smattering of global locations. Instead, they only have servers in 33 countries. That said, I would like to mention that they have servers in the most popular geographic regions like the UK, US, Hong Kong, and Europe. To give you an idea of how they rank against competitors, know that PureVPN has servers in 140 countries, ExpressVPN has servers in 78 countries, though the average provider tends to operate in 40 to 50 countries. 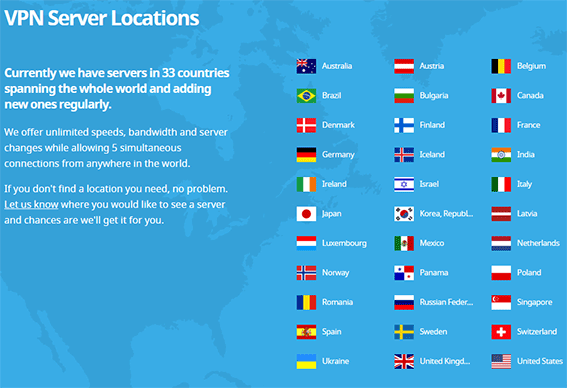 Also note that none of their subscription packages impose data caps or bandwidth throttling. They say that you also have unlimited server switches, but I don’t think I’ve ever seen a single VPN provider limit the number of times a user can switch VPN servers. But they do have an interesting feature that I don’t believe I’ve seen with any other provider.

Their software has a mechanism called port discovery. Essentially, the software will automatically scan networks and firewalls to search for open ports with which to run OpenVPN. This could be particularly handy if a network has irksome restrictions like a time limit or is only available for business-class customers. By tunneling through the network, you could circumvent these restrictions with port discovery.

I think that Buffered does a good job of providing strong security. They use OpenVPN, AES-256 encryption, and SHA1 HMAC authentication. Furthermore, they use RSA-2048 for handshakes. This is pretty common among providers who offer strong security, and to date, AES-256 encryption still can’t be cracked. Some conspiracy theorists think that the US or Chinese government has secretly formed a supercomputer and found a way to break AES-256, but I’m skeptical. If they can break AES-256, we’re all doomed anyway since it’s one of the strongest protocols in existence.

And as far as privacy is concerned, I have to give them 5 stars. They don’t log any user activity, though like most other providers, they do log metadata. I thought it was interesting that they even specified what data they collect from their website. I think they’re trying to be as transparent as possible. According to their privacy policy:

“In connection with your activity on our web server, we may collect your IP address, time and date of request, page requested, user agent, referrer and cookie values sent or received. The server log files are collected and analyzed to provide information about user activity in the aggregate and identify potential errors or problems with website performance.”

Basically, they don’t log website data on a per-user basis, because the statistics are aggregated. I think a lot of other services collect similar information from their website, but fail to specify that in their privacy policies.

Buffered VPN tested better than the average provider. I lost hardly any upload or download speed, though a little loss is to be expected due to VPN overhead. In addition, I was pleased to see low latency and ping times. One factor that determines the latency to the speed test server is geographic distance. If the VPN server is located close to the speed test server, the times will be lower. However, a few VPNs I’ve tested had heinously high ping times, which is indicative of poor network performance.

Not only did I have fast pings to the speed test server, I also had fast and reliable pings to Google’s DNS server. I liked how steady and reliable the latency was. It was approximately 106ms, plus or minus 1ms. I didn’t have any problems downloading files, and streaming video content buffered smoothly. There wasn’t a moment where I had to wait on the video to load.

Like many other providers, Buffered does have a knowledgebase on their website to help users with a variety of problems. They have several guides that help troubleshoot individual error messages, as well as configuration tutorials and general help types of articles. One thing I like is that users can access their own application log files for troubleshooting. However, I think that the knowledgebase could have been designed and organized better. It’s in need of a makeover, but at least it’s there. 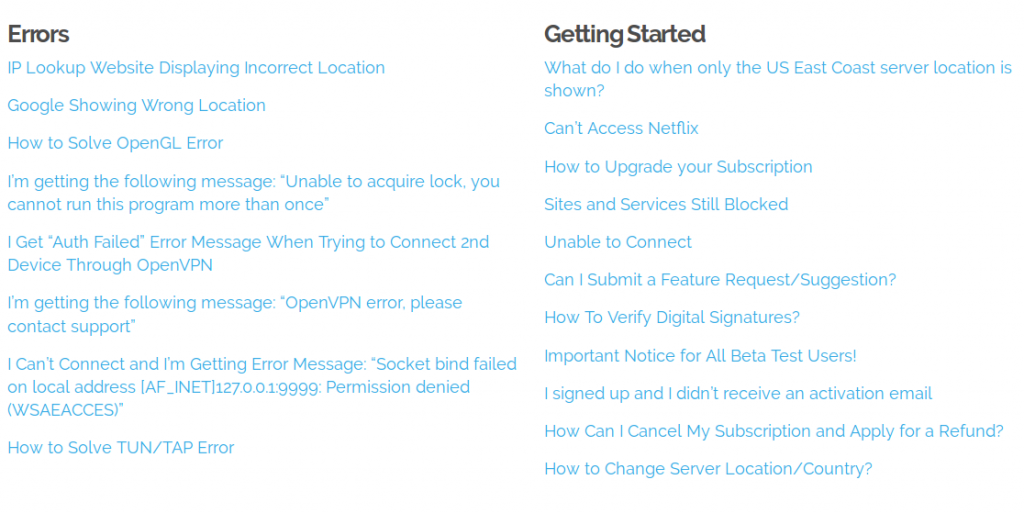 In addition, the knowledgebase articles are highly detailed and have high quality images. They do lack a live chat feature, and their contact page is a simple web form that customers can use to open tickets. Though I don’t personally prefer to call support to initiate a support ticket, I think some users wouldn’t like their lack of posting a support telephone number.

All in all, I thought that Buffered offered a good, solid, well-rounded service. I did feel that their pricing was a little on the high side, but fortunately they allow users to connect up to 5 simultaneous devices. I also would have liked to see some advanced features and functionality like a VPN kill-switch, but overall, I thought they had a service that can compete with other big names in the industry. In summary, Buffered has moderately high pricing, an above average set of features, excellent security and privacy, fast server speeds, highly reliable connections, and adequate customer support. If you’re still unsure, I recommend taking advantage of their 30-day money back guarantee. Doing so will give you ample time to test out their VPN connections.