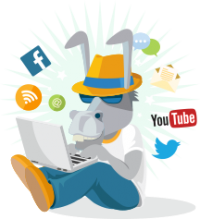 One of the perennial big dogs in the world of VPN providers, Hide My Ass, has been in service since 2005.  The UK based provider is well known in internet circles, both popular to some and unpopular to others. As of 2016, the service has greatly expanded and covers almost 200 countries total, more than any other service on the market.  Whether you’re trying to secure your browsing, or just want to access Netflix and Hulu from abroad, the service provides solid speed performance to match its’ obscene size. A free proxy service is available to everyone directly from their website without having to buy anything, but as with all public proxies, performance is a hit or miss. Although being a good service to unblock online content and encrypting your data for journalism, entertainment, or any other fully legal activities, they do keep minimal IP connection logs, and fully comply with DMCA take down notices.

HMA rose to fame on the back of their free proxy service. For many internet users proxies could be more than sufficient for their needs such as accessing specific geo-blocked websites or providing a slightly more anonymous browsing experience. However, public services used by the masses tend to end up being blocked by most websites, Therefore, in order to get a premium service, opting for one of Hide My Ass’s paid Pro VPN plans is the way to go. HMA! Pro is offered with traditional monthly, bi-yearly, and yearly plans. Each account only allows up to two simultaneous connections to be used, and they must be on different servers. A 30-day refund policy is offered with a strict 10gig usage limit.

Prices are automatically adjusted to your local currency using the detected location you’re browsing from, but below are the USD equivalent prices. What I found is that depending on your currency, the 6 month package had varied discount rates while the yearly package would remain at the same 57% discount. *At the time of this review, HMA is having and extended Summer Sale, prices are subject to change.*

Overall, considering that each plan only allows up to two devices to be used simultaneously, HMA’s pricing does not qualify as a cheap VPN service. However, similar to costly services, they have a large network, in fact they have the biggest network at this time. If having that many countries and servers is important to your needs or wants, I suppose it justifies the cost.

As mentioned, Hide My Ass began as a simple proxy service which allowed users to browse and bypass geographically restricted on censored websites through spoofing their IP addresses. In the goal of reaching geo-specific services like Netflix or Hulu, proxies no longer represent an effective tool, since they are regularly detected and blocked by services. However, that is not to say that you should not try it for your own needs, it is free after all, just remember that it does not provide full data encryption. It has since built on that core functionality and has evolved into a full internet privacy suite. Additional to VPN accounts and proxies, they also offer encrypted email. Although I did not test it for myself, this service is also offered free of cost.

Onto their VPN service, it comes complete with compatible client apps for most major platforms. Windows, Mac OS, iOS, and Android all have available apps recently updated with a pleasing graphical interface. It allows for quick server selection, favorite list customization, as well as 3 specialized quick connection modes that only require a single swipe or click to activate. The first is ‘Instant’ mode for quickly connecting to a server for security on WiFi networks or while needing to login to your online bank account. Second you have ‘Location’ mode which allows you to enjoy fast speeds while selectively picking geographical locations to unblock streaming services such as Netflix, be it during travels or from home. And lastly the ‘Freedom’ mode is designed to protect and provide unrestricted web access to journalists or citizens living in a censorship regime. It quickly selects the closest servers marked as safe free speech locations.

The customer portal provides visual tutorials on how to configure various devices including Smart TVs and gaming consoles. Linux users, or network router setups are also available, and customer service can be contacted with setup specific tickets that reach experienced and capable agents ready to help.

Additionally to having a larger server selection, all major countries also provide Virtual location servers. Essentially, they are direct routes from specific countries that provide the fastest possible transfer rates for those locations. For example, you can connect to the United Kingdom using the Germany, Frankfurt – Virtual UK server if you happen to be located in Germany. This will connect you to a local server, that appears to be in the UK, allowing you to access UK services with the best possible speeds. 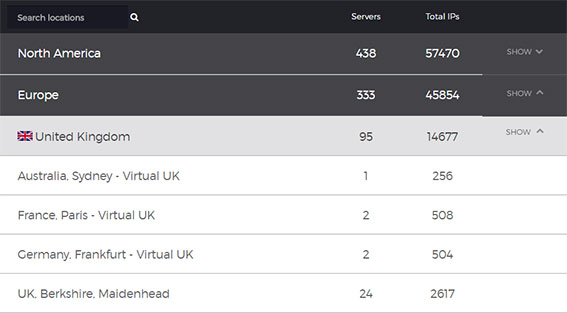 HMA is known for supporting international causes where citizens and journalists are oppressed or worse, arrested for accessing or sharing information on social media. They provided free access during the Egyptian revolution, and strongly support the cause of a free and uncensored internet for all. But what they don’t allow is any kind of illegal activity, down to P2P torrent file sharing. As mentioned previously, IP logs are kept for every session, and BitTorrent usage is against terms of service and would be enough to have your account terminated. Being based in the UK, they protect protect themselves from legal action by fully abiding to DMCA notices, making the service unsuitable for peer-2-peer use.

Otherwise, if used as intended, the large network of more than 190 countries covers over 350 cities and locations. You can rest assured that no matter what place in the world you are trying to access, there should be at least one server available. For popular locations, hundreds of servers are deployed to handle all the bandwidth. Currently counting just under 1000 servers, HMA has continuously grown their network in order to accommodate new users. 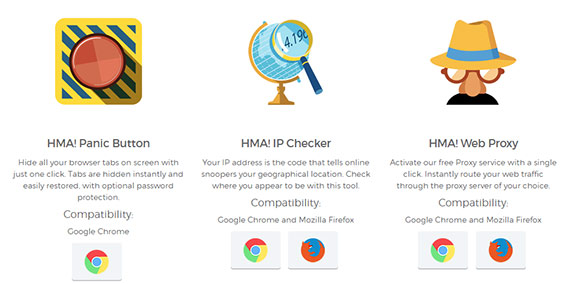 Additionally to the supplementary proxy and email service, Hide My Ass also developed some cool browser extensions that could be useful to some. You can add the proxy service through extension for both Chrome and Firefox, as well as a built-in IP checker for quick verification on the go. Chrome users also have an exclusive extension called HMA! Panic Button, which allows the user to quickly hide and bring back all tabs on the screen with a single click. Users can also optionally lock the tabs with a password.

Hide My Ass uses more than 120,000 shared IPs across their server clusters to privatize each session. Up to 256 bit encryption is used through the control channels, while OpenVPN uses 128bit encryption through OpenSSL 3DES, AES, RC5, and Blowfish algorithms. L2TP/IPSec, and PPTP protocols are also available.

While HMA has industry leading security and privacy tools, it has come under fire in recent years for its controversial practice of logging IPs. Log session IPs are kept for a period of 6 months. This practice came to light after the arrest and trial of Lulzsec (A spin-off of Anonymous) hacker Cody Andrew Kretsinger, an American citizen who admitted to using HMA to hack into the systems of Sony Picture Entertainment and disseminate the personal information of thousands of user across the internet. HMA provided the FBI with logged IP addresses which are thought to have been instrumental in apprehending Krestinger. They have a strict no data log policy, but they use the IPs for each session to track any users breaking their terms of service.

In response to the intense backlash, HMA released a statement on their blog dubbed The Lulzsec Fiasco attempting to justify their cooperation with authorities. I’ll let you decide for yourself whether it was justified or not. They have upheld a clean slate for years besides the one heavy incident, and many peer reviews and tests have shown their servers to properly encrypt and mask geo-locations. They now clearly state that their service is aimed at unblocking censorship and geo-blocked online content for international users. They have regularly supported countries with censored web access and provide a reliable service for journalists and every day users living in heavily censored regimes. However, they abide to local UK regulations and laws, and thus any kind of illegal activity, as small as downloading copyright torrents will have your account banned.

In the end, if you don’t plan to use your VPN for P2P torrents, there is no reason to feel like their service is not secure and private. As far as collaborating with authorities, companies like HMA that are located in the UK, US, Canada, or any of the Five Eyes Alliance countries, are bound to abide to local laws. This means that if a court order comes in requesting information, they either comply or get shut down. You can compare the situation to when Lavabit shut down its doors rather than provide the encryption keys to all subscriber email content on their servers. The US government were after Edward Snowden’s emails, but it also meant giving up the privacy of every other subscriber. In this case, HMA could only provide what they log, which we’re IP addresses.

A really cool feature of HMA is the ability to test the speed of different servers via built in tools prior to connecting.  This allows you to find the fastest network matching your criteria without wasting time trying out each one.  You can also switch servers effortlessly with no loss of security while doing so.  All and all, you’ll almost always be able to find a high speed (defined as a system that will run no lower than 90% optimal speed) connection in the geo of your choice; particularly if you choose to spring for the premiums service.  This makes this provider perfect for even the pickiest streamer, or gamer among us. The network has been continuously upgraded and expanded, ensuring that you can expect dependable performance throughout long term subscriptions.

Stability wise, as long as I was using OpenVPN or L2TP, I did not incur any disconnections. Unfortunately they do lack a kill switch in case of stability issues, but so far so good. I recently tested their latest app update, including quick connect modes, and was pleased with overall performance both on desktop and mobile platforms.

HMA has generally garnered a lot of praise for the Customer Service on the back of their 30 day Money Back Guarantee and a very large and active community on their forum. Customer service agents are very helpful when the community cannot provide accurate help. Online chat is also available through the website, but submitting a ticket is usually best for advanced or complicated issues.

Overall, Hide My Ass meets the needs of the majority of VPN users. For those looking to unblock geo-locked content, HMA has the largest network coverage, and hundreds of servers in all key content streaming locations. They are also known for being a great security and privacy choice for journalists or citizens working in oppressing and censored regimes. With more than 120,000 IPs and no data usage logs, they make a fine choice. However, the large coverage does come as a slightly higher cost when you consider that only two devices can use a single account at the same time. Speed and performance is delivered, adding value per dollar spent, and a 30-day/10 Gigabyte limit refund policy is available allowing you to fully test the service before committing.

Although you can still use the service for torrenting, I highly advise not to, or at least to only do so on servers in countries with weak copyright enforcement. However, even so, if a take down notice is sent, you’re likely to have your service terminated. With so many other P2P friendly options available, I would highly advise to look elsewhere for this specific purpose.