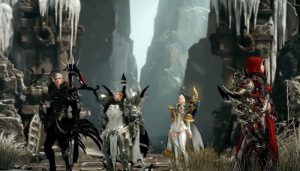 Lost Ark was released in November 2019 and it quickly became a highly popular video game, with a high percentage of players enjoying the action and unique characters of this MMORPG title. Developed by SmileGate, Lost Ark is a game that offers the chance to take part in combats in a 3D world of fantasy. Lost Ark is a free to play game that many compare to Lineage, but it has gained recognition on its own. The main downside of the game is the fact that it is only available in South Korea. Player from other regions are hoping to see the game expanding globally, so that they can find out exactly why this game has become such an incredible phenomenon in South Korea.

In order to be able to play Lost Ark, a social security and a phone number from South Korea were required during the registration. This made it practically impossible for people outside South Korea to play Lost Ark. However, there were websites creating accounts using Korean information and selling them to players in other countries. Many people also asked friends in Korea to help them to set up an account, but those who don’t know anyone there, opted for buying verified Lost Ark accounts from websites like OBTGAME. Thankfully the game has become available in more regions, but in some cases it is still difficult to access the game outside South Korea. One you have an account, you can download and play the game outside South Korea. To be able to play the game, you need to use a VPN service that has servers in South Korea. Then you need to download Stove and then install Lost Ark. Here are more details about the steps that you need to follow:

ExpressVPN is one of the major players in the VPN industry. Its high quality, easy to use software and fast servers are some of the advantages that deserve to be highlighted. ExpressVPN doesn’t keep logs of your activities and it protects your internet traffic with high encryption. You can connect to reliable services in South Korea and get access to Lost Ark.

NordVPN is another good option to defeat the restrictions that stop you from playing Lost Ark. This provider provides high security and it also has fast servers that enable you to play the game without facing slow performance. There are at least 10 servers in Korea so you can get around the geographical blocks. NordVPN is a zero logs solution so your privacy remains safe.

Another provider that will help you to get around the restrictions and enjoy Lost Ark, even if you are not in South Korea is Surfshark. This is a relatively new solution when compared to other VPNs, but Surfshark has gained the trust of its customers through high quality and advanced features. It doesn’t keep logs of your activities.

CyberGhost is ideal for streaming, playing and downloading content since it is quite fast and it delivers stable performance. It enables you to bypass restrictions so that you can play Lost Ark from any location. CyberGhost doesn’t keep logs and it offers affordable plans.

4. Now you can run Stove launch. Log into your Lost Ark account before you start to download client. Keep in mind that if you have not used Stove launcher before, you will be asked to update.

5. Select Lost Ark and then tap the Orange button to begin the download of Lost Ark client.

6. Once you have downloaded and updated the client successfully, you can start creating your character and play Lost Ark, no matter where you are. Players from North America, Europe, Asia, Australia, the Middle East and anywhere else, can get access to the game even if it hasn’t been officially launched in their region yet.

8. If you get an error message, it is likely that the VPN is not working so make sure that you double check this first by going to www.whatismyip.com and confirming that you have indeed a South Korean IP.

9. When everything is working correctly, your client will be downloaded. You can select the storage folder/ disk. You will need to wait a few minutes until it appears in the bar. Download Lost Ark client and tap the blue button to start the game.

Lost Ark is free to play and it has a cash shop. The game client is about 25GB and players are advised to allow at least 50GB of space for the game. From time to time, you will be asked to update the client. It is not clear when the game will be released globally. Keep in mind that you need to be careful when purchasing a verified account. While using the game, if you get an error message, we advise that you use Google Translate. It is possible to use the scan feature to translate from Korean to your language. One thing to keep in mind is that while you need to use the VPN to download and launch the game, the VPN is not required while you are playing.